Had a blast at the New Hope Wesleyan Church Fall Festival in Hudson, FL..

Everything was free and fun was had by all that came and enjoyed the event. Hay rides, various games and a great band. A bonfire was the night capper for those who came back and enjoyed the music provided by Patrick Stanton and smores galore.

On a personal note was a very blessed and a great reminder of the love Jesus has for his people. Seeing the smiles on kids for winning a toy to getting off the hayride with a smile from ear to ear. Thanks Pastor Eleanor Ladd for letting us help you with this great event and for the other members of various churches coming out to help make this a great success.

Posted by Chaplain Steve at 4:05 PM No comments:

Great time at the Largo FD Chili Cook off with Denise, daughter Brandy and My Pal AL.
Free chili tasting, K9 demo, ambulance viewing and kids riding in Fire truck with lights and siren wailing.
There was some Owls there, great looking so close.
Bayflite flew in and landed and made the day for lots of kids.

Posted by Chaplain Steve at 10:07 PM No comments:

Saturday with the wife in Sarasota.

It was my birthday weekend and decided to travel to the Amish Country in Sarasota.

We decided to see the Para Surfers by the skyway as we headed south first.

Posted by Chaplain Steve at 1:34 PM No comments: 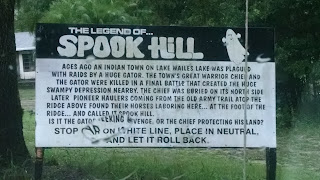 So once again I talked Denise into another one day get away. Was gonna go to Bok Tower and then head home, but will reading about Bok I noticed a link to Spook Hill near Bok Tower. Being the Graveyard rabbit that I am, we left earlier and made it to Lake Wales and found Spook Hill.

After reading the sign and following directions we indeed travelled in reverse uphill while our van was in neutral. Being the natural pressimist that i am I tried doing this farther from the indicated line, and we still travelled uphill but at a slower pace than the first. We really had fun here and tried different ways but we did travel like they said we would. Worth the early start to our trip.


More on Bok Tower soon
Posted by Chaplain Steve at 10:25 AM No comments:

Fun with the Texas Grandkids


Busch Gardens trip with the kids. Was great seeing them and had a great time here and on the way home at the Duck Commander for fun and fireworks over the July 4th weekend.
Arianna got some free donuts from Godwin, great time was had by all. 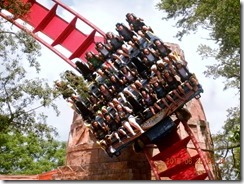 Posted by Chaplain Steve at 8:15 PM No comments:

And Justice was served?

A nurse died Monday after 42 years in a coma following a brutal rape, in a case that led India to ease some restrictions on euthanasia.

Aruna Shanbaug suffered brain damage and had been in a vegetative state in a Mumbai hospital since being strangled with a dog chain and sexually assaulted by a hospital worker in 1973.

The 66-year-old Shanbaug had suffered a bout of pneumonia in recent days and was on a ventilator, officials at King Edward Hospital in Mumbai told the Press Trust of India news agency.

Shanbaug was attacked by a ward boy in the basement of the hospital where she was discovered 11 hours later, blind and suffering from a severe brain stem injury.

Left bedridden, she spent more than four decades being cared for by a team of doctors and nurses at the hospital.

Her attacker was freed after a seven-year jail sentence.
Posted by Chaplain Steve at 7:39 PM No comments:

Chaplain Steve
Feeding the homeless, ministering to anyone in need, and started a Cancer Care ministry.